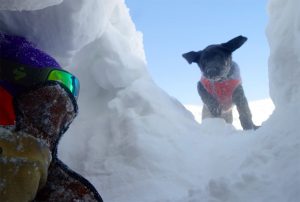 You’ve heard of sundogs at Alta, but did you know there were ski patrol dogs here as well? In fact, there have been ski patrol dogs at Alta for over 70 years, starting with a German Shepherd named Cola, the first avalanche dog in the United States.

Since Cola, Alta Ski Patrol was the first in North America to construct a robust Avalanche Dog Program. This initiative is owed to Dan O’Connor, forever known as “OC” on the mountain. OC and his dog Je Yu (pronounced “Hey You”) started the program right here in 1980. Both were instrumental in building Alta’s avalanche dog program into what it is today: one of the best in the world.

Today, most Level A avalanche ski resorts have multiple search dogs because of OC’s efforts. At Alta, there are six avalanche dogs currently on duty. They all have two-syllable names for easy calls and commands. At any point on the mountain, you may get the chance to see Minga, Banjo, Tula, Monty, Lucy and even OC, in remembrance of Dan, Wasatch Backcountry Rescue’s first dog handler.

While adorable, these dogs do have a job to do and stopping to say hi can be distracting for them if you don’t have permission from an Alta Ski Patrol handler first. Here’s to hoping you see any of our local pups voluntarily, and not because you’ve found yourself in a bad situation. But even if you do, know that with the Alta Ski Patrol dogs, you’re in good paws.