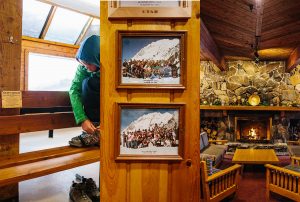 Inside the Walls of the Peruvian

Have you ever walked around the halls of the Peruvian and something unusual caught your eye? Did you think twice about it? Well, you’re not alone. As notable and full of stories outside the lodge is, the interior is chock full of oddities that all have their own story behind them. We’re here to tell a couple of those stories.

This one you can’t miss. Right off the lobby is the Alf Engen Room, named after the Father of Alta Ski Area. If you’ve been to Alta, you know who Alf is.

John Cahill, owner of the Peruvian for 51 years and counting, was good friends with Alf before, during and after he bought the lodge in 1970. To commemorate him, the Alf Engen Room was designated, complete with large print pictures, pastel painting and a bust of Alf’s head, worthy of multiple Hall of Fames.

Nowadays, people use the Alf Engen room for group events, watch football on the only public TV and relax by the fire. The charismatic Alf would be proud to see his room used for bringing so many people of Alta together.

Have you ever picked up the paddles to play a little table tennis in the locker room? Ever taken a break after 10 straight wins–yeah, right–on that bench conveniently next to it? That’s Duff’s Bench, and it has its own story.

Over two decades ago, a geology class from Penn State took a trip out to Alta every year from July to August to do field studies on the Rocky Mountains. After a couple great years in a row with the group, the Peruvian and that Penn State class decided to make it a regular thing.

The Director of that Penn State Field School trip was Dr. David P. “Duff” Gold. The bench, now over twenty years old itself, is honored in his name after he retired. And no, we don’t know where the name “Duff” comes from either. It’s pretty damn cool though.

Just before you encounter Duff’s Bench, covering the walls of the stairway down to the ski locker room are dozens of framed photos of the Alta Peruvian classes. Beginning nearly 30 years ago, the Peruvian staff, from the line chefs to the ski instructors, huddled in for a group picture and stuck it on the wall in Lil’s, the employee dining room.

Quietly, each year’s group got together at the end of the season and took a group photo and hung it up so only they could see it–an inside joke of sorts. Then, almost 10 years later, the Peruvian decided the people need to see these and displayed them on the wall in which they hang today.

As the years grew, so did the staff and the interest from guests. Return skiers often find last year’s staff and smile or laugh at the familiar faces–some still here and some on to new adventures. The Class Of Wall has not skipped a year since its clever introduction in 1993. That even includes the rushed closure of the 2020 class.

So whether it’s a bust of one of Alta’s most revered skiers in the Alf Engen room or the mug of your favorite front desk staff member from last year, there are plenty of things that catch the eye in between these walls. Keep those eyes out when you return this season. You always find something new in the Alta Ski Valley.

Next UpSeason Recap: A Wild Ride