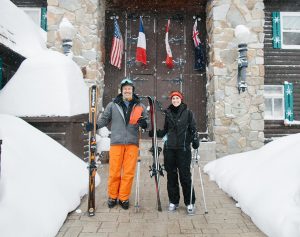 Usually ups and downs are what skiers crave. This past 2021-22 Alta Peruvian ski season had plenty ups and downs to speak of. But hey, that’s what makes this whole thing so fun, isn’t it?

But just as the “up” kept getting higher, January and February began the slide down, as those two months produced minimal snow. While we assumed that would spell disappointment for another season, the strong start led to record numbers at the Peruvian. Travelers returned in the biggest numbers we’d seen in years. The Peruvian was officially back!

And just like that, the season finished as strong as it started, packing on consecutive 70” snowfall months in March and April. The snow gave us a legendary sendoff in the last weekend of the year in April, as 25” fell for the remaining Alta locals, lodge staff and even a wedding we hosted – the first ever “Winter Wedding.”

That Winter Wedding was a poetic cap to a season defined by bringing people back together. After two grueling years for hotels, travel and skiing in general, we welcomed back old friends and new faces. From the UCLA Skiing Alumni Group to the Seattle and Milwaukee Groups, seemingly every weekend was a reunion of some sort.

As we close the 2021-22 chapter on another year of ups and downs at the Peruvian, we look forward to bringing those same people back together again in no time. The Peruvian is hosting a wedding every weekend this summer from June 4 to October 1. In between those weekends, we’ll be working hard to upgrade the guestrooms, bathrooms and locker rooms before we open again in six short months.

A lot of people from around the world think of the Peruvian as a second home. For many, that was taken away from them for two full years. Whether you joined us again this past year or have plans to return next season, on behalf of everyone at Alta Peruvian, welcome back to your second home!

Next UpHappy Trails To You