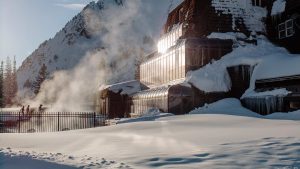 Snow Before You Go

While the past year hasn’t given us much to look forward to. The weather reports, on the other hand, have been as exciting as it gets. That’s only if you’re a powder hound like the rest of us, of course.

Last ski season, we endured a 52-hour Interlodge in the middle of a winter that produced the second-most snow of the past six years, only behind the 2018-19 season. This year, now midway through the season, we’re on pace to match last year’s totals.

Thanks to onthesnow.com’s Snow Tracker, we can dive into the snowfall figures from the past decade of seasons at Alta. Everything from Total Snowfall to Average Summit Depth is tracked each year, giving us engaging visuals and flurries of nostalgia. For instance, that legendary winter of 2018-19 gave us a total of 656” of snowfall over a whopping 92 days, in which one of those days saw 27” of snow!

But those aren’t the most revealing stats that stuck out to us. Every year in this past decade has had a final day of snow later than April 9th (excluding last year’s abrupt end to the season). With the latest snowfall, we know one thing is for sure – there’s plenty of snow to come.

So, plan to spend some time this March or April at the Peruvian – there’s a good chance we’ll greet you with a little wave and a whole lot of snow. And if you’re in the healthcare or emergency services field, take advantage of an exclusive offer just for you.