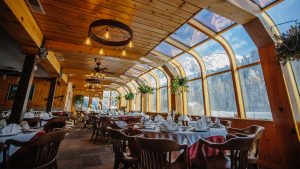 There’s A New Chef in Town

SOMETHING NEW IS COOKING THIS SEASON

You probably noticed it’s another heavy snow year, but did you notice heftier dishes of food as well? That’s all thanks to our new Head Chef, Kyle Stranick. Kyle took over as the Head Chef for this season, although it’s not nearly his first winter here at the Peruvian.

As a 20-year-old cook in Delaware, Kyle was given the opportunity to work a season in the Rocky Mountains. He said, “why not?” That was 9 years ago. Since then, he’s come back almost every winter to fill our empty stomachs after a long day.

A ravenous traveler, Kyle has spent his summers in North Carolina, Delaware, Martha’s Vineyard (which he highly recommends), and has future plans to explore Maine and the Pacific Northwest. When he was asked to take over as Head Chef, he knew exactly what region would influence his menu.

The answer was southern food. From shrimp & grits to smoked brats, Kyle embraces comfort food. A snowboarder himself, there’s nothing he craves more than sausage, gravy & biscuits when he comes off the mountain (or any time for that matter.) The dish he’s most proud of is a bourbon-marinated short rib with marinated bok choy and sweet potatoes served on Wednesdays. He’s even gotten a confident “thumps up” from Curly for his tasty concoctions.

With a brand-new staff for this season, Kyle admits the Head Chef role “comes with its headaches.” Due to the heavy snow this year, there have been some delays from the supply truck getting up the mountain amongst other new responsibilities he’s still figuring out in his first go-around as the boss. But, as Kyle says, “it’s sometimes rough, but I wouldn’t have done it if it was easy. I love this place.”

Next UpHappy Trails To You