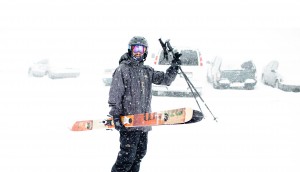 Attention powder chasers – this just may be your year in Utah… thanks to the soon-approaching El Niño. Not sure about what El Niño actually means? Here’s the scoop: According to NASA, an El Niño occurs every few years. It’s when an unusually warm pool of water in the ocean essentially creates a natural short-term climate change event. It spurs extreme weather patterns around the world. This year is shaping up to be record breaking, or so we hope.

There’s been a lot of chatter already about the possibility of a strong El Niño over the next few months and the affects it may have on the Wasatch Mountains. So glass half full, we’re taking a moment to daydream about this possibility. And if forecasts prove accurate, patterns stay on course and history repeats itself, there’s a much better chance of having above average snowfalls this season. Fingers crossed!

This is all great news and with good reason. Not only do we love record breaking snowfalls, but we also have an emotional connection to an abundance of snow. As skiing enthusiasts, a nostalgic feeling comes right after the first big storm – almost like being a child on Christmas Day. You can almost immediately feel the tightening of your boots, smell of the crisp air, powder in your face and the great stories you’ll share during après ski. It’s a spirit that’s unique to Alta and reminds us of past traditions that continue to get celebrated season after season. But most of all, it gives us “Altaholics” some pretty darn good bragging rights.

And with that we say, Viva El Niño!