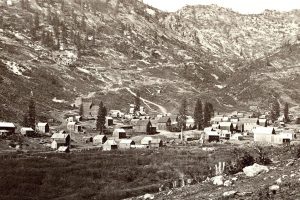 Behind every great town there’s an even greater story. Sometimes, several. And Alta, Utah, is no exception. From natural disasters threatening its early settlements to a famed skier foreseeing Alta’s future as a top ski destination, the town has seen highs, lows and plenty of in-betweens. (A VW Beetle buried under snow on a roof, anyone?) Here’s a look at a few of the events that shaped Alta into one of the country’s top skiing destinations.

1. In 1872, several thousand people lived in Alta, thanks to the first verified silver claim in 1865. However, by 1873 the population declined due to economic factors and natural disasters — including wildfires and large avalanches — which nearly wiped out the settlement. Luckily, 1904 brought new mineral discoveries, which prompted a second mining boom. That boom later dwindled with the onset of the Great Depression.

2. World-champion skier Alf Engen was hired in 1935 by the United States Forest Service to determine the area’s potential as a winter sports site. During the winter, Engen ski’d into Alta from Big Cottonwood Canyon from Catherine’s Pass, and concluded the area was well suited for development. With Engen’s recommendation, the Civilian Conservation Corps (CCC) planted hundreds of trees on Alta’s slopes. One of the first New Deal programs, the CCC was a public works project intended to promote environmental conservation and to build good citizens through vigorous, disciplined outdoor labor.

3. In order to gain tax relief, “Mayor” George Watson deeded 1,800 acres of surface rights to the Forest Service for development of a ski area in 1937. The first Collins Lift was constructed in 1938 out of pieces of an old aerial mining tram. As home to America’s second chairlift, Alta is central to the history of American skiing. One year after, the Alta Lodge opened and the Collins Chair operated for the first time on Jan. 15. Prices are .25 cents for a single ride and $1.50 for a day pass. In February, the first use of explosives in avalanche control is used on Superior Gulch on Mt. Superior. The resulting slide buried 2,000 feet of road under 14 feet of snow.

4. In 1949, the U.S. Forest Service developed an Avalanche Center at Alta. The area was chosen because it was “the first true alpine ski area to be developed in the United States and because detailed records of snowslides have been kept in this area for the past 75 years.” The center at Alta became the regional headquarters and processing base for Steven’s Pass, Washington and Berthoud Pass, Colorado. In 1972, the Forest Service moved the Alta Avalanche Study Center to Fort Collins, Colo. Ironically, in December, a huge avalanche struck the Alta Lodge, filling the top floors with snow and depositing a Volkswagen Beetle on the roof.

5. Today, Alta is referred to as a “skier’s mountain” for many reasons. It is known for its scenery, diverse terrain and for the uncanny quality of snow that it receives season after season. The ski area has decided to be “just for skiers,” so other snow-sliding equipment is not allowed. It is one of three areas in the United States that does not allow snowboarding.

(Historical information courtesy of the Town of Alta)

Next UpSay Hello To Nicole